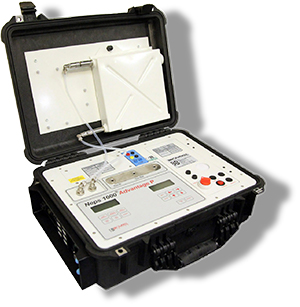 Nitrogen Purging System 1000 Dual Voltage(NEPS1000) maximises the dry gas purging process for humidity removal.
Maximising dry gas purging, the NEPS1000 DUAL VOLTAGE is a fully self-contained and portable nitrogen purging system that can be operated easily by connecting the equipment to the device’s purge connection. Also, this purging system is available with a self-contained pump and moisture adsorbing molecular sieves to allow users to operate both in the field or workshop environment.

User-friendly, the NEPS1000 DUAL VOLTAGE can be programmed to view process control values and display dewpoint measurements (in Degree Celsius and Fahrenheit) with pressure (in Kpa or psi). This nitrogen purging system features a selection of four inbuilt leak testing capabilities to verify the sealing standard of the equipment to be purged. Pressure testing can be conducted at pressures from 10.3 Kpa (1.5 psi) to 34.4 Kpa (5.0 psi), and pressure, leak rate display resolution is 0.01 psi.

The dewpoint monitor provides users with the dryness of the gas before commencing the purging operation. Its dewpoint stat feature enables users to determine the amount of moisture contained within equipment and implement an optimised gas and purging procedure for production control.

When using the remove dewpoint sensor option, the NEPS1000 DUAL VOLTAGE will monitor the dewpoint dryness’s progress and switches off and isolate the dry gas when the selected dewpoint is achieved. A data logger can monitor the dewpoint degradation time, allowing users to calculate the water vapour transmission rate (WVTR) and determine the water removal rate during the initial purging phase. The system can operate from global country voltages and frequencies ranging from 100 to 230 VAC at 50-60 Hz. There is also a 24VDC version available.