Moisture Control is highly critical during the manufacturing, production, and transportation of products for businesses as not being able to maintain low Relative Humidity (RH) inside packaging or containers can cause damages to products. This is where desiccants, hygroscopic material that sustains a state of dryness, come in handy. Desiccants are mainly used by food, pharmaceutical, and packaging manufacturers to prevent moisture from entering and extend their products’ shelf-life. Below are five common types of desiccants that prevent moisture damage.

Silica Gel is an amorphous silicon dioxide with an uneven atom structure that works as a harmless traditional desiccant frequently used in the healthcare and electronics industries to adsorb moisture. It operates by a process known as adsorption, in which water in the air is absorbed between the microscopic pores as the air passes through them. This is made possible due to its high surface area. The absorbers contain nanometer voids spaces and a tridimensional structure of oxygen and silicon atoms. The liquid or gas material that fills the void or pores is called silica gel xerogel. Due to its physical properties, Silica Gel is an excellent drying agent for protecting various commodities and products against corrosion, contamination, spoilage, and mould growth. Silica Gel is divided into three distinct degrees of humidity detection and control by colours: white, blue, and orange.

There are many usages and applications of Silica Gel, and here are some:

Silica Gel can also be used as a moisture indicator as it changes colour when it transitions from an anhydrous (dry) to a hydrated (wet) state. Methyl Violet and Cobalt (II) Chloride are the most common forms. When dry, Cobalt (II) Chloride is a deep blue but turns pink when wet. It is, however, carcinogenic and poisonous, and the EU has categorised it as a hazardous substance. On the other hand, Methyl Violet can change colour from orange to green and orange to colourless depending on the situation. Despite being poisonous and carcinogenic, it is still considered safe for medicinal usage in some products.

Another name for Silica Gel is hydrated silica or silica aerogel. Approved by the Food and Drug Authority of the United States (FDA), Silica Gel is deemed “Generally Recognised as Safe,” suggesting that it can be added to food products without further approval. Other uses of Silica Gel in food products are absorbent, anti-caking agent, carrier, conditioning agent, defoaming agent, emulsifying chill-proofing agent, filter aid, viscosity control agent, stabiliser, and anti-settling agent.

Silica Gel is used in domestic water filters because of its water adsorption characteristics. The surface structure of Silica Gel makes it excellent for the adsorption of specific minerals dissolved in water.

Molecular Sieve is a substance composed of microporous aluminosilicate materials, such as zeolites. Molecular Sieve contains customisable pore openings that allow specific molecules to separate from one another by absorbing molecules smaller than the pore openings’ width while excluding the remainder. This enables them to dehydrate, purify, and segregate specific gases and liquids, making it the most recommended desiccant. Molecular Sieve is also commonly used in filtration systems to lower humidity levels and can be used in temperatures up to 300°C due to its ability to absorb up to 22% of its weight. As a result of its varying pore sizes, the product applications of each type of Molecular Sieve differ, making the nature of Molecular Sieves particularly flexible as they can be utilised for various purposes.

There are many usages and applications of Molecular Sieves, and here are some:

The petroleum sector makes extensive use of Molecular Sieves in which are most used in the drying of gas stream assemblies. For instance, the water content of gas in the liquid natural gas (LNG) business should be less than one ppmv. If it is higher, the likelihood of ice obstructions in the stream will increase. Molecular Sieves thus help to absorb and reduce the water content.

Molecular Sieves are used in filtration devices for air and water supplies, such as underwater masks worn by scuba divers and firefighters. An air compressor is used to supply air in these types of applications. Depending on the application, the air compressor will be packed with a Molecular Sieve, Activated Carbon, or both to remove particulates and compressor exhaust products from the breathing air supply. 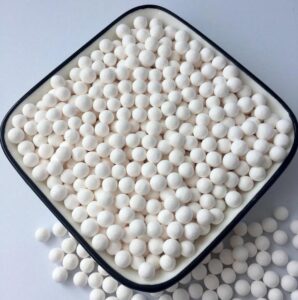 Activated Alumina is a porous, solid form of Aluminium Oxide (Al2O3) utilised in heavy industrial applications for various purposes, including adsorbing catalysts and eliminating fluoride and other pollutants. With a surface area higher than 200m2g, Activated Alumina can adsorb a wide range of substances, such as gases and liquids, without changing its form or structure, thus making it an excellent desiccant adsorbent. It is also often used to filter fluoride, arsenic, and selenium from drinking water. The adsorbent’s toughness makes it ideal for use in high-pressure applications.

There are many usages and applications of Activated Alumina, and here are some:

Activated Alumina is widely used in Defluoridation, a process of decreasing the level of and removing fluoride present in water, especially drinking water. Due to its capabilities as an adsorbent, Activated Alumina fibres can easily and effortlessly reduce fluoride in water. The amount of fluoride filtered by activated alumina is proportional to the amount of time the water is in contact. If activated alumina is left in the water for an extended period, it will significantly reduce fluoride in the final filtered water. Water filtered at lower temperatures and pH levels is more effective.

As previously stated, Activated Alumina is also utilised in the adsorption of catalysts in the manufacture of polyethene and hydrogen peroxide. It is used as a selective adsorbent in Claus catalyst processing, removing pollutants like fluoride, arsenic, and sulfur from fluid streams.

Activated Clay, also known as bentonite, is an absorbent aluminium phyllosilicate clay that contains a substantial amount of the element montmorillonite. This dry clay desiccant primarily protects products in industrial packaging and comes in the shape of granules that are slightly coarser than Silica Gel. The Activated Clay is an excellent alternative to Silica Gel in all conventional packaging applications due to its high efficiency, dehydrating properties, and low cost. It is also available in 3 different types – Sodium Bentonite, Calcium Bentonite, and Potassium Bentonite.

There are many usages and applications of Activated Clay, and here are some:

Activated Clay can absorb many protein molecules from liquids or even just water, making it very effective in the winemaking process. It removes excess protein from white wines. If Activated Clay had not been applied in this technique, the clear white wine might have turned hazy or murky after being exposed to a specific temperature. It also cuts down on the amount of time it takes to clarify white and red wine. Additionally, it can be used to absorb oil and grease.

Activated Clay is primarily used as a drilling mud binder and a groundwater barrier. It drills fluids to keep cutting tools cool and lubricated, remove cuttings, and avoid machinery blowouts. The bentonite suspension begins to take the shape of a gel at high concentrations. As a result, it is a popular component in drilling mud since it prevents mud cake development.

There are many usages and applications of Activated Carbon, and here are some: Both at municipal treatment plants and in household filtration systems, activated carbon adsorption is considered one of the best and most prevalent treatment methods for eliminating pollutants from drinking water. There are two ways: supply Powdered Activated Carbon into the treatment train and removed it together with other particles present in the water treatment. Or, use Granular Activated Carbon in a filter bed or medium through which water travels.

Activated Carbon is used in filtration devices for air and water supplies, such as underwater masks worn by scuba divers and firefighters. An air compressor is used to supply air in these types of applications depending on the application. The air compressor will be packed with an Activated Carbon, Molecular Sieve or both to remove particulates and compressor exhaust products from the breathing air supply.

Click here to find out more about the available desiccants at Stream Peak!