Transporting goods or equipment can be somewhat risky. As efficient as having equipment delivered to a location is, the process involves the risk of damages. Damage was prevented by using proper packaging solutions. During transportation, products can be damaged easily. Some objects are much more fragile than others, and this does lead to inconveniences. With the delivery of broken equipment or damaged goods, inconveniences and losses are incurred. In transit, a variety of damages can be made. They can be caused by improper packaging, improper storage conditions handling, and so much more. The benefits brought by the availability of transport are often negated by the damages that occur in transit.

How Does Equipment Get Damaged?

There are several ways in which goods can be damaged in transit. Broadly, they can be classified into the following:

It is the most common cause of damage, and it does sound rather obvious. Mostly, most equipment facing some shock or impact in transit ends up getting damaged in some way. The force at which the impact occurs is a deciding factor in such cases. The harder the hit, the more damage can be caused, resulting in a partial or complete loss to the functioning or aesthetics of the equipment. This type of damage can be caused by mishandling, dropping of products, collisions during transit.

Moisture can be in a variety of forms, such as leaks, rain, spillages. All of these can be highly harmful to the equipment that is being transported. It is beneficial for equipment with electronic components in them. Water can lead to corrosion or even short circuit devices. It can also cause cosmetic damage, and all of these can be rather expensive to reverse.

Dust is everywhere. The dust has particularly severe consequences for any equipment that relies on electronics, which we don’t pay much attention to. Dust tends to block the movement of air. It means equipment with fans can be made to overheat, leading to different kinds of damage. Dust also attracts water, and this can lead to a whole bunch of problems again. Dust can also cause equipment to give inaccurate readings, which can be very problematic.

It is a charge that is developed in electrical components. It can be harmful, causing heat damage and even burns. It tends to degrade internal components over time, shortening the life of equipment or causing instant failure.

Humidity causes problems similar to those caused by excess moisture. Excess heat can cause specific components to melt or become brittle and degrade. It can even damage led displays and screens. Exposure to continuous differences in temperature can lead to expansion and contraction, which can damage the connection and ultimately lead to the failure of the equipment. It can also lead to inaccurate readings.

It can be considered shock and vibration, but as it is a factor that can ultimately be controlled and prevented, it must be considered. It is one of the most common methods of damage infliction. It happens due to lapses from the side of the individuals handling the equipment. Wrong Cases or packaging- Bad packaging is one sure-fire way to damage equipment. For instance, if fragile goods without proper packaging protect them, they will almost certainly be damaged. It is a lapse that is more common than one would think.

A majority of the cases mentioned above can be avoided by using appropriate containers. There are IP-rated containers that can protect equipment from dust, moisture, and temperature conditions. Using relevant filler material like foams and foam cushion packing can prevent various damages caused by shock and vibrations. Insulated containers can offer protection against temperature and humidity variations.

Detecting Damage Based on Transport 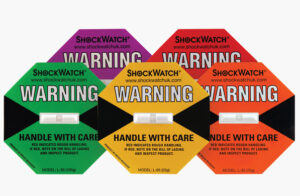 Damage detection is an essential aspect of receiving transported goods. One can never be sure of the kind of damage a piece of equipment has been through in transit. If one can understand if a piece of equipment has been through tumbles or shock in transit as soon as they received it, they could save much time by immediately replacing the product or claiming reimbursements from the transportation firm.

There are several right products out there for this purpose, such as:

Here is a video about Impact Labels.