How Does VCI Work? The Volatile Corrosion Inhibitor (VCI) is a chemical substance that reduces corrosion and is ideal for keeping enclosed void spaces rust-free. They have sufficient vapour pressure to release molecules from the compound into the air. VCIs come in various formulations, for example, films, oils, coatings, cleaners, etc. There are also a variety of formulations that protect ferrous, nonferrous, or multi-metal applications.

How does VCI work?

Corrosion happens when an electrolyte is present on the surface of a metal. The electrons then flow from high-energy areas of the metal to low-energy areas in a loop through the electrolyte. The corrosion process results in the formation of oxidation on the metal surface. With the presence of VCI, electrical current cannot flow from the anode through the electrolyte into the cathode. The VCI molecules attach themselves to a metal surface to form an invisible, thin film to protect the metal from corrosion.

VCI protection is a function of:

VCI Paper/VCI Film is frequently used to wrap metals during transportation or storage to prevent corrosion. When the VCI Film is in direct contact with the metal, VCI molecules adsorb on the metal surfaces, creating an invisible molecular barrier against corrosive elements such as oxygen, moisture, and chlorides. As VCI molecules vaporise out of the film and diffuse throughout the package, they also form a protective molecular layer on metal surfaces. The molecular layer is not in direct contact with the film. When the packaging is removed, the VCI molecules will vaporise and float away.

Once the VCIs have adsorbed on the surface of the metal, they provide an effective barrier that is hydrophobic and prevents moisture from getting through to the metal surface. Consequently, this prevents the formation of corrosion. At Stream Peak, we offer various VCI Liquids like Transit Coatings, Rust Removing Liquid, and Lubricating Liquid.

VCI Bags are coated entirely with compounds that act as barriers between the metal and the corrosive substance. Our unique formula of VCIs seeks out metal surfaces and attach themselves, covering the entire surface with a protective layer.

The type of VCI packaging used should be considered based on various criteria such as: 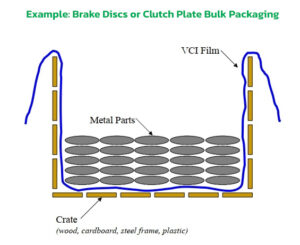 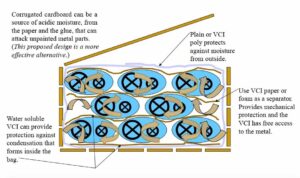